Just as the fashion shows roll around in Paris every year at the same time, so does Baseball Season in the States. I used to go to baseball games with my late son Nick occasionally, and as of last year, my youngest son has picked up the tradition. He invited me to some games last year, which I thoroughly enjoyed with him. I had a really great time with him, and was very touched when he invited me to Opening Day in San Francisco this year, with my youngest daughter. 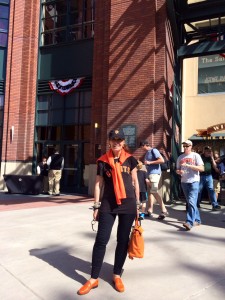 First, came the wardrobe issue. The night before the game, I pulled out all the orange sweaters I could find in my closet, orange shoes, an orange bag, a black Giants T shirt my son gave me last year, and black jeans. The colors of the SF Giants are black and orange, and I found a black baseball cap with the team emblem on it in my son’s room, and a team jacket I bought last year in case he invited me to future games. So I was all set to look like a fan—-in Halloween colors!!! (see photos below). The day dawned brilliantly hot and sunny, one of those rare days in SF that feel like real summer, although San Francisco is blessed with very few warm days, and is chilly year round. But Not On Opening Day, it was gorgeous.

My daughter and I went to meet my son and his fiancée at the stadium half an hour before the game was to begin, and the excitement was mounting when we got there. There was a flag ceremony, music blaring, the fans were excited, the stadium was crowded. The fans had turned out en masse to support their team under a hot sun, people were wearing shorts, and it was around 80 degrees. And at one point, Three Coast Guard planes, painted in bright colors flew over us.  And then, red silver and blue streamers were unfurled into the crowd.  It’s obvious how much San Francisco loves its baseball team, and I was thrilled to be there with my son. 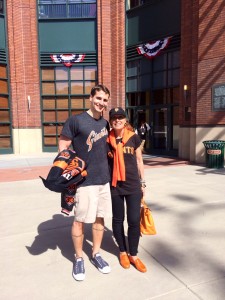 Right before the game began, there was another special moment. The little boy that the city has named Bat Kid, appeared with the adult Batman, in a batmobile and drove slowly around the edge of the field. ‘Batkid’ is a very special little boy, 5 or 6 years old, whose dearest and most cherished wish was made possible last year, with the city’s help, through the Make-A-Wish foundation. A cancer survivor in remission he wanted to be Batman for a day, and in extraordinary fashion, downtown San Francisco was literally transformed into Batman’s City, as almost everyone downtown dressed up, and he even ‘fought some bad guys’ and saved the city. It was far more than a little boy’s dream come true, the city fell so in love with him, and everyone downtown helped make it happen. The Downtown area of SF came to a standstill that day. Today he reappeared as Bat Kid, with Batman, and the adorable little boy, in his Batman costume, walked onto the field to throw the first pitch.  After that touching sight, the National Anthem was sung, and the game was on.

All the usual, colorful sights were in place, the vendors with hot dogs, ice cream, cotton candy, and drinks, threaded their way through the crowd. Everything was festive and exciting as the game began, and the home team didn’t let us down.  The score was 7 to 3, against Arizona, and the fans were cheering loudly, and I was happy as can be with my son and daughter, and future daughter in law.

It was a perfect, gloriously sunny day, on a happy occasion, sharing all the excitement with two of my children. I can’t wait to go to more games this season, if I get invited, and until then, beloved friends, Play Ball!!!!