I hope that all is well with you. Yesterday was one of the nights that I wait for with excitement all year. Kind of like the old movie “Brigadoon”, where a whole town appears once a year, or once every hundred years, and then disappears again. In this case, the magic happens once a year and it was a little less magical this year, but fun anyway. I’ve told you about it before, it’s the White Dinner in Paris, an extraordinary event that began in Paris about 26 years ago. It has been emulated in other cities since, with some variations. But the original real deal is in Paris. It began when a naval officer and his wife celebrated their anniversary in June, by setting up several folding tables with friends, and served an elegant dinner on white china, with a table cloth, in front of one of the monuments of Paris. They invited a few friends, the husband wore his white summer naval uniform, as did his friends, the wife wore a white dress, or perhaps all the women did, I’m not sure. They had a fabulous meal in an incomparable setting, right on the streets of Paris, in the setting of their choice, I’m not sure which of the monuments they chose, but there are many spectacular ones to choose from. And they loved the evening so much, that they returned to do it every year, and invited more and more friends. Eventually it grew to an event of several thousand. And it is still a remarkable event. It is organized by a committee of six men in Paris, the entire event is by invitation only (a greatly coveted invitation in Paris every year), it is free, no money changes hands (in Paris, i believe that in some of the cities where they have imitated it, they charge to attend the event). And once invited, the location of the dinner is kept secret until 2 hours before. Sub heads or group leaders are assigned lists of people to notify. The rules are that you must wear white clothes from head to toe; each couple must bring a folding table, 2 folding chairs, china, cutlery, a white table cloth, and all the equipment to serve an elegant dinner for two. You bring your own food for two, people bring silver candlesticks and flowers to decorate the table, and at 7pm the night of the event, you are notified of where to meet at 8pm, and you arrive dressed in white with all your gear. It is a deep secret where the dinner will be held, and thousands of people arrive at the meeting place, filled with excitement, wondering where they will actually be dining. There is a celebratory atmosphere, people are excited as they gather and wait to hear where they will go next. The final location is a few blocks from wherever you meet, because you have to carry your folding table, 2 folding chairs, and a pull cart/caddy of some kind with everything for the table and the food. Outfits range from white jeans and casual clothes, to some very sexy white cocktail dresses and high heels. (I opt for flats and white jeans myself, because walking across the cobblestones in high heels, pulling a caddy full of plates, cutlery, glasses, and food, doesn’t make a lot of sense to me, but the women in elegant white dresses look great.) Men wear everything from white suits to white jeans too; everyone wears white shoes, and respects the rules of white from head to toe. 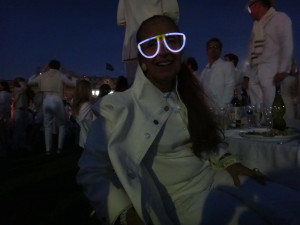 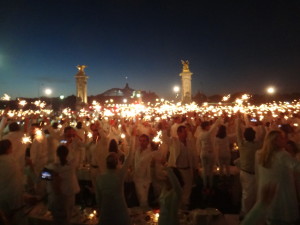 As people chat and greet each other in the meeting location, finally it is 8:45 pm, and your ‘group leader’ tells you where the dinner is, always an amazing location, and people are thrilled as they head to the dinner location a few blocks away. And in a radius of a few blocks around it, people flock to one of the remarkable Paris monuments, and people fly in for this event from all over the world, so you hear every imaginable language around you. You arrive at the dinner location at exactly 9 pm, and in a matter of minutes the huge crowd is directed to their exact spot, in neat rows, and your assignment is to the inch of where you unfold your little table for 2 and set up. And once the tables are up, you are in long, long rows of tightly packed tables, in most cases, with men on one side and women on the other. Out come the candles, the candlesticks, the flowers, the china and chrystal, and within minutes, an elegant outdoor dinner is set up. Astoundingly, fourteen thousand people now attend this event, and it is totally orderly, remains friendly, orderly, and well behaved. People help each other set up, and offer each other some of their wine or food. Also amazingly, there are no crashers, bystanders gather and watch, but no one tries to fake an invitation or claim a place they weren’t assigned. Also interestingly, the event is technically ‘illegal’ because there are no permits requested for a group of this size dining in a public place. But the event has become a Paris tradition now, and the diners are left alone to have their fun. Music appears later in the evening, and before that, it is timed so that everyone has just settled into their seats at sunset, as the evening sun glimmers on whatever monument you are dining at (at the foot of the Eiffel Tower, the Place de la Concorde, in front of the Louvre, or Notre Dame, or whatever the location of the year. Some years the group is divided between two locations, because of its size.) And as night falls all the tables are candle lit, as the diners in white celebrate their favorite (and mine) night of the year. Sparklers are handed out late in the evening. And at 1am, like Cinderella, they pack up everything they brought, are instructed not to leave a single shred of food or paper, everyone takes away their own garbage (in white plastic garbage bags of course), and fourteen thousand elegant white clad dinner guests disappear into the night, hoping to be invited again next year. It is a magical event. Although occasionally real life intervenes, a few years ago it rained (though it rarely does on that night), which thinned out the crowd a lot. Only the die hards stayed.

This was my third year of attending the White Dinner (Le Diner Blanc), the first year it was in front of Notre Dame, the second year, last year; it was in front of the Louvre. And both were among the most beautiful nights of my life. I was overwhelmed by how spectacular, magical, and how much fun it was. I went with 15 friends, invited by a friend, and I had a ball. They were both absolutely unforgettable nights, the memory of which I will cherish forever.

Last night it was held on the huge lawn that stretches for many blocks, in front of the tomb of Napoleon, Les Invalides, and other people were assigned to six of the bridges over the Seine, and under the bridges as well, which is close to the lawn where most people were. It was different this year, because our host was more ambitious and had organized a bigger group, of 80 people, which is a lot of people to organize, and he had decided to spoil us and hired a caterer who provided the tables and chairs, and the food, so we arrived with empty hands. And although it was a generous gesture, those of us who had been before (and the host himself) decided that it took some of the fun out of it, we missed carrying our tables, chairs, table decorations and food, and setting it up ourselves. The friend I went with is a fabulous cook and was disappointed not to cook for the night, and offer some of it to friends. And although the lawn is a beautiful location, with the gilded dome of Napoleon’s tomb in the background, it wasn’t as pretty as Notre Dame and the Louvre. But some years are like that, so it was a little less magical, but I was still thrilled to be there, we all were, and grateful to our host for inviting us. 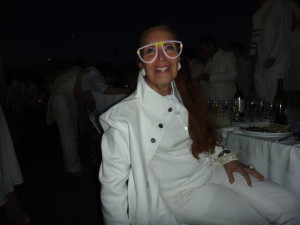 Last year, the friend who came with me surprised everyone by bringing a mysterious box, out of which he produced, later in the evening, Chinese paper lanterns, with a little wick at the bottom that you light with a flame, the lanterns fill with hot air from the flame, and when full of air, you release them, and they sail into the night sky like a million stars returning to Heaven. You’re supposed to make a wish as they sail off. He brought a hundred of the lanterns with him, and we were all like excited children as he helped people light them and send them aloft. He brought even more this year, and thrilled the crowd again. All fourteen thousand people were watching the lanterns sail away, and he delighted the entire crowd again. He was the hero of the night!! And this year he brought light up ‘eyeglasses’ as well, that glowed in the dark, so we looked silly but had fun.

It is a very special evening that I look forward to all year. I’m thrilled to go, and dragging my own food and supplies next time, as in the past, I’ll be there if I’m invited again…..I hope I will be. It’s my favorite night of the year!!! 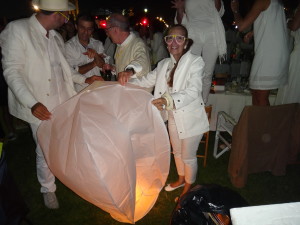