I hope that all is okay with you.

For someone who has claimed until this summer that I’ve never lost a friend, who died, (although sadly, I know many young people, contemporaries of my children, who died tragically young, including my own son)—-but on that score, this has not been a good summer or fall. Friends have been falling at a rapid rate. And even more shocking, some of them are people of SUCH UNIMAGINABLY IMMENSE TALENT. Robin Williams two months ago, another friend this summer in Paris, and now Oscar de la Renta, the famous dress designer. In Mr. de la Renta’s case, it was not entirely unexpected as he has fought a valiant battle with cancer for the past several years. But repeatedly, he seemed to conquer the illness and continued to create, see friends, be present, and then he would win another round against the disease. He was a remarkable man in a myriad ways. And I realize as I look back, that I’ve known Oscar for about 30 years, and met him sometime in the 80’s when he was widowed, and before he married his lovely present wife Annette, who is herself the epitome of fashion. And I had heard last week through a mutual friend that Oscar wasn’t doing well, and was finally losing the battle with cancer, after several years. So I wasn’t entirely surprised when I heard the sad news.

I read his obituary and it is a litany of his extraordinary accomplishments, his stellar rise in fashion at an early age in Spain, Paris and New York. I have seen beautiful women dressed by Oscar for as long as I can remember. He has won every imaginable award in fashion, lifetime achievement awards, the French Legion of Honor, and above all the deep respect of everyone who knew him. He was truly a Legend in fashion, and such a truly lovely person.

I can no longer remember who first introduced me to Oscar, if it was Barbara Walters, or my agent Mort Janklow, because both were close to him. We attended many dinner parties, and when he married Annette, I would see them both at social events, and was grateful and touched to be their friend. When something good or bad happens to someone famous or well known, people wonder what they were really like. Certain words jump to mind about Oscar, he was the absolute epitome of, the most perfect example of the perfect gentleman, with impeccable manners, total charm, exquisitely tailored, always charming. He was the best of a breed that no longer exists. In addition to that he was outrageously funny, and above all he was always incredibly kind to me. I loved sitting next to him at dinner, because he was sooo much fun and always made me laugh. I went to several of his birthday parties, and he was a fabulous dancer.

Probably my favorite story about him involved his son. Oscar was very active in charitable activities in the Dominican Republic, where he was born. He founded an orphanage, which meant a great deal to him, and he was very involved in it. As a result of that involvement, he adopted his son Moise, while he was widowed and before he married Annette. And I was always so touched by his dedication to his son, his love for him and deep concern, as well as for his stepchildren when he married Annette. He was a wonderful father, and a truly amazing and admirable man.

Oscar was elegant, sophisticated, talented, brilliant, charming, kind. His qualities were dazzling. He was a lovely human being, he adored his wife, his children, his friends, his dogs. He had all the virtues to be an extraordinary friend, and so he was.

He dressed most of the famous women on the planet, First Ladies, movie stars, famous socialites, all the women you read about who are beautifully dressed. If you needed a fabulous dress for something REALLY special, or a major personal event, you turned to Oscar. And our family was no exception. He made my oldest daughter’s white lace wedding dress, and her bridesmaids’ elegant beige silk ones (which included all four of her sisters, and several of her friends). He made my last wedding dress, which is truly the most beautiful dress I’ve ever had or seen. It was a fairytale gown. Since it wasn’t my first wedding, I didn’t want to wear white, and he made a gown with an ENORMOUS ballgown skirt (think Scarlett O*Hara, with a skirt so wide that you couldn’t possibly get through a door), with a long train of course, in a taupe colored satin (like cafe au lait color, or a ‘latte’) with purple velvet appliqued bunches of violets on it all over the dress. It had a scooped just off the shoulder neckline, a tiny waist, the HUGE skirt, long sleeves, and around the neckline, and at the cuffs was golden sable. It was a dress fit for a princess, and I felt like one in it. It was an incredible dress, and I smile every time I see it in my closet. (See photographs below). In addition, in the ‘special events’ category for us, Oscar designed the beautiful white coming out dresses for two of my daughters, when they came out in New York at the Infirmary Ball at seventeen and eighteen. It’s an old fashioned tradition, but I did it as a young girl, and there is an innocent sweetness to it, no different than other rites of passage to mark a young girl’s transition into young adulthood. In the old days, the purpose of the event was to find a husband, nowadays for those who still do it, girls ‘come out’ as debutantes in their freshman year of college, and it begins you on the path of being an adult young woman. And it’s a fairytale night. Oscar made all of these events of ours more special, with the beautiful dresses he designed for us, to make each of us feel more special at an important time for us.

And when he became the Haute Couture designer for Balmain in Paris, I became one of his most dedicated clients, as well as a friend, and I have rack after rack of his exquisite creations, and still wear many of them. I wore one, a navy taffeta strapless evening gown, with a long train, to one of my daughters’ wedding two years ago, and it still looked spectacular (my daughter begged me to wear the dress, because it’s so special).

Oscar was a man of a million talents, a design genius, he created Haute Couture gowns for the ‘rich and famous’, but also gorgeous wearable clothes for working women and people busy in active lives in the real world. He was a philanthropist, a wonderful husband and father, a devoted friend. I vaguely remember that he loved to go fishing. No one could dance like Oscar. No one could laugh like Oscar, or make me laugh as hard. Oscar made every woman he dressed feel special, and every friend feel cared about. Oscar was extraordinary and unique. He dressed first ladies and heads of state, major stars and Oscar winners, some of the most important women in this country, yet whenever I saw him, he made me feel just as special.

How terribly we will all miss him. How lucky we were to know him, for those of us who did. How lucky the world was to have him in it. How blessed his friends were, his family, and all who knew him. I can’t bear the thought that yet another shining light has vanished into the night sky again, that such an enormous talent has slipped into memory and legend. And yet, he was so alive, so vibrant, so fun, so funny, so brilliantly talented, that men like that are never gone. And even in something so simple as opening my closet, where on a high rack my still spectacular wedding dress by him is hanging, I know that I will look up forever, and see it, and remember the fittings, the fun, and how beautiful I felt in it the day I got married, and all the women who have worn his gowns, he gave us each a special, very precious gift. Think how many women’s lives he has touched, those who knew him and those who didn’t, men like that are never gone. So here we are again, looking into the sky again at night, and knowing that there is one more bright star up there, our beloved friend, Oscar de la Renta. How blessed we were to know him, and have him in our lives. I will miss him, we all will. 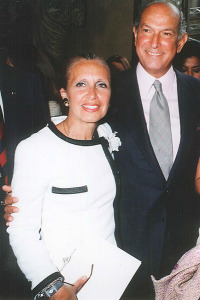 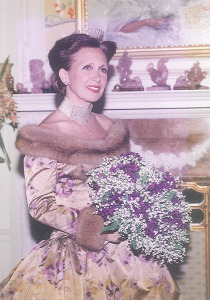 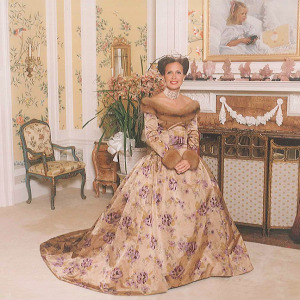 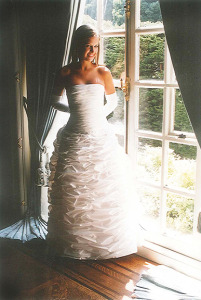 Victoria in her coming out gown 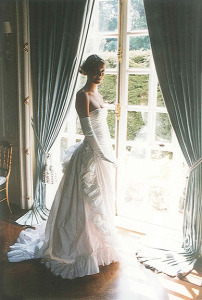 Vanessa in her coming out gown 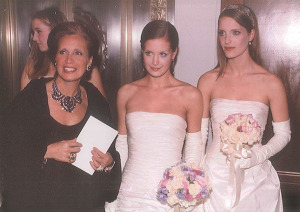 DS, Victoria and Vanessa at the Infirmary Ball, NYC 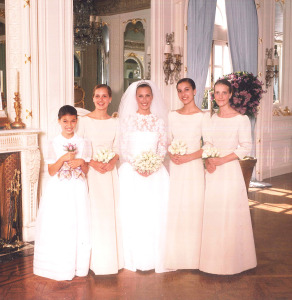 Beatrix’s wedding, with her sisters as bridesmaids. All gowns by Oscar de la Renta