Well, the world is definitely spinning out of control. After months of ‘low Covid numbers’ in France, the masses of people who went on holiday, particularly in the South of France, were careless, didn’t wear masks, paid no attention to the Covid rules, hung out in crowded bars, and on the beaches, and even went to nightclubs—–they then came back to the cities, Paris included, brought Covid home with them, along with their suntan lines and sand in their shoes, and have spread the virus, gotten lots of people sick, creating the second wave that everyone has feared for months. The numbers in France are higher than they were at the worst of the pandemic in the beginning (in March), BUT the big difference is that there are far, far fewer deaths than there were 6 months ago, and the hospitals aren’t crowded (yet, some doctors say). As a result of the very low death toll, and the ICU’s not being crowded (in many cases, because young people are getting the virus, and for the most part they seem to have lighter cases, although not always), the government is not re-confining people with the severe measures of last Spring, and are reminding us to wear masks, social distance and wash our hands. The belief is that if we follow those simple rules, we will be able to bring the virus to heel, and get the numbers down again. But we’ve taken a big step backward in several countries, as a result of carelessness during the summer vacations. Which makes it all the more crucial, that people follow the rules now, so we get things back in control as quickly as possible. Other European countries are facing the same problems as France after summer vacations. In the US, the numbers are slowwwwwlllyyyy coming down, but not fast enough. New York has done a masterful job driving the numbers down (and have instituted stringent quarantine rules for anyone entering the state of New York, especially from California). Other states haven’t fared as well, or been as serious with their rules.

We have to be REALLY good now, and careful, to get the virus in Control. It’s worth the sacrifices we have to make to achieve in it. The better behaved we are, following the rules, the more lives we will save, and our own.

Getting things in control seems to be our biggest challenge: Covid, and now the fires blazing out of control on the West Coast of the US..

I long for the time when I reported to you on Fashion Week, and haute couture shows, art fairs, and auctions and new fashion trends coming in. Now it’s all serious stuff—with a little fun still thrown in occasionally. ArtParis is one of my favorite art fairs, they have wonderful fun stuff, and don’t take themselves too seriously, so there is an interesting mixture of serious art contributions, and some lighter more commercial pieces. I always find something I love there, which is not always true at the other art fairs.

The ArtParis show is always in April, at a time when I need to be in the States, both for my family and my work. This year, due to Covid, it was postponed from April until September—and the fair actually happened last week, at the Grand Palais in Paris, a big airy venue, big enough to avoid crowds, with almost no foreign attendees, except from within Europe. With international borders still closed (much to everyone’s chagrin), There were fewer art dealers represented at the show, and fewer spectators, but I enjoyed the show thoroughly. I bought a small photo of a Louboutin shoe and hung it in my daughter Vanessa’s room, and it looks just right, with a little touch of fun!!! So art is not dead, and fun is not dead. It was a little shot of normalcy last week, despite the rising numbers in France. And we can ALL use a boost right now, some cheer, and something lighter to think about,!!

And other than that very welcome bit of relief, the fires on the West Coast, and particularly in California, mesmerized us all week on the news, in Europe too. The statistics are brutal.

In California alone, 7,718 fires have erupted during this fire season so far.  At this exact moment, 45 major fires are burning, of which 28 of them are major complex fires not contained at the moment.  3.2 million acres have burned and are continuing to do so, unchecked. The fire zone extends from the most Northern part of Washington State all the way down to the Mexican border, with the air quality so toxic that you can’t open a window or leave your home in some places, or even walk your dog. Three layers of smoke are being held down by a heavy layer of San Francisco fog. So the smoke is trapped and can’t escape. As you can see by the photographs taken from my San Francisco home last week, at noon, it is as dark in the daytime now, as it is at night. Last week a ghoulish orange flow hung over the city, like Halloween gone mad. How much more can people endure? We can endure as much as we have to.  We can’t give up now, but it is certainly not easy for many people to hang in. Jobs, children, school, money, It’s hard to make the best of it. But we have to.

So we’re coping in the moment with Covid, AND the fires. The fire statistics and projections are not good today, and the Covid numbers aren’t encouraging either. But sometime, somehow, somewhere, some way, the fires have to be put out, and we have to win these battles. For the safety and security of our small circle, our bigger world, and the entire world. We can’t give up, no matter how dense the smoke is beyond our windows, or how high the virus numbers.

And for the people on the West Coast, they are facing a double challenge, doubly confined, for the Covid virus, and for the fires.

Mother Nature is a hard taskmaster, and can be merciless at times. The past few weeks have been hard. The photographs tell the story. And firefighters have been brave and relentless fighting the fires. Eventually, the smoke will lift, the air will clear, the fires will be contained, and in time a vaccine will be found for the Covid virus. But in the meantime, these have been some very, very hard weeks, with the fires added to the virus. My prayers and compassion reach out to all the people so tragically affected.

This will be a better week. It HAS to be. 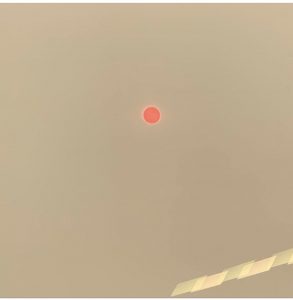 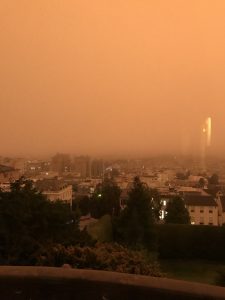 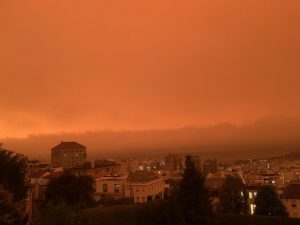 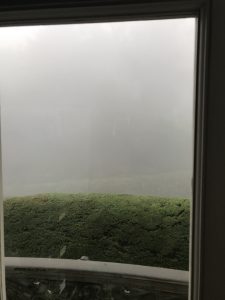 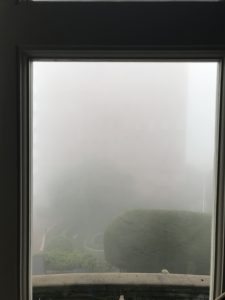 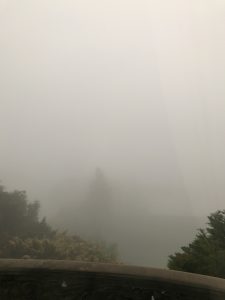